In our coverage of the semiconductor space, we typically think of two main vectors of hardware – the CPU and the GPU. Beyond that, we look at FPGAs, microcontrollers, and this decade is bringing the advent of the dedicated AI processor. What ties all of these products together is actually the FPGA – a field programmable gate array that allows a skilled technician to essentially build a custom circuit out of configurable gates. This means an FPGA can be used to design and simulate a full CPU or GPU, but also an FPGA offers a reconfigurable way to offer optimized compute power that adapts to the needs of its users without the cost of millions or tens of millions to design dedicated silicon. One of the first FPGA companies on the market was Lattice Semiconductor, which now focuses on small power efficient FPGA designs that end up in everything from consumer devices to servers.

We’ve been loosely following Lattice for a number of years, however three years ago the company went through a bit of a change. It hired Jim Anderson, the then AMD SVP of Computing and Graphics who had overseen the launch of Ryzen, the brand of processors that has re-energized the company from near bankruptcy to a number of years of extended market share growth and profitability. Jim and I met frequently at AMD events and we spoke at depth at the state of the consumer product landscape as well as how the semiconductor space was evolving. When it was announced he took the role of CEO at Lattice, I was a little taken aback, but glad that he had found a new challenge the complemented his background in semiconductor design and expertise.

Over those three years at Lattice, Jim has initiated a cultural shift that is playing out in the company roadmaps – new products, a more agile approach, and a need to focus on enabling machine learning at every part of its product stack. The recent financial disclosures at Lattice show an increasing demand for its hardware, as well as the company making strides to double its addressable market over the next five years. I thought this would be a good time to reconnect with Jim to find out exactly what he’s doing at Lattice to earmark the next generation of growth at this foundational FPGA company.

From a career standpoint, Jim has a lot of experience. Academically he holds a MS in EE and CS from MIT and an MBA from MIT, and in his career he spent 8 years at Intel as a CPU architect on Xeon and Itanium along with strategic planning, 8 years at LSI in strategic planning and marketing of network components, a year at Axxia/Intel as the GM of Networking, and then 3 years at AMD leading up Ryzen. Now he is three years into the role of CEO at Lattice.

Ian Cutress: You’ve now been CEO of Lattice for three years, and coming from the position of SVP of AMD’s Computing and Graphics business group, what made you make the jump from consumer hardware to power-efficient FPGAs?

Jim Anderson: Well I loved it at AMD. I was super happy there – I love the people at AMD. Great people, really innovative, very determined. I’m a product guy – I always have passion about the product, and in particular that product we were launching that day back in Italy, I was always super excited about. I love the products.

But when Lattice reached out to me, it was kind of hard to pass up the opportunity, because Lattice is a company that’s one of the original founding FPGA companies from the early 80s. It’s a company that’s been around for about 40 years, it’s got a great history of innovation, and it’s kind of a unique place that innovates and innovates around small and really power efficient FPGAs. Those devices go into all sorts of applications across many different markets. It is a great company. I felt like if I joined Lattice that I could help it get on a stronger path moving forward, help it build better products, and build products more quickly.

So that’s kind of what attracted me to Lattice and the last three years have been a lot of fun. We’ve completely rebuilt the product line at Lattice, we’re on a great trajectory, and actually, I’m even more excited about the years to come. We have some really great products on the roadmap.

IC: Most users who know about Lattice understand that it’s an FPGA company, but when most of us speak about FPGAs, we refer to the big names in the industry: Xilinx and Altera (which is now part of Intel). Can you talk about how Lattice positions itself in the market compared to the big names, and why that matters?

JA: Yeah, absolutely. First of all let me point out that if you look at unit volume size, actually Lattice is the highest unit volume manufacturer of FPGAs. We’re the biggest by unit volume. Where we specialize is in small size, power efficient, and very, very easy to use FPGAs. Because they’re really power efficient, and they’re small size, they can go into all sorts of different applications that really large FPGA just can’t go in. So either from a physical space constraint or a power constraint, our devices can reach all sorts of applications that our competitors can’t, and so you’ll find us in industrial, all sorts of industrial IoT applications, industrial automation, or robotics. You’ll find us in communications, computing, consumer devices, and automotive electronics as well. So we really specialise in the small power efficient part of the market.

Those two competitors that you mentioned, which are traditional competitors, they really focus on the very large, very high power, complex FPGAs. We focus on the small size and power efficient. You would be amazed at the number of applications we go into. Whenever I meet with a new customer, I’m always amazed at some of the new innovative crazy applications they’re using our chips in.

To give you a sense of the size, this is one of our smallest FPGAs on the end of tweezers here. 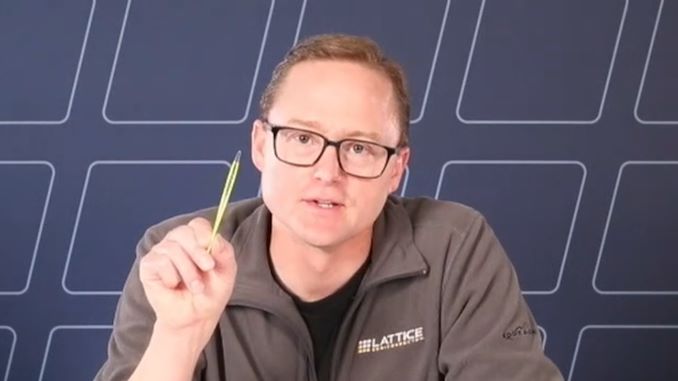 I’m showing it on the end of the tweezers, and this is about 1.4 millimeters square. Obviously we make some bigger devices as well, but devices this size can go into applications that other chips can’t, where there are either size or power constraints.

Since you mentioned the last time we met three years ago, if we compare our FPGA to this Threadripper chip from AMD, [this is what it looks like]. 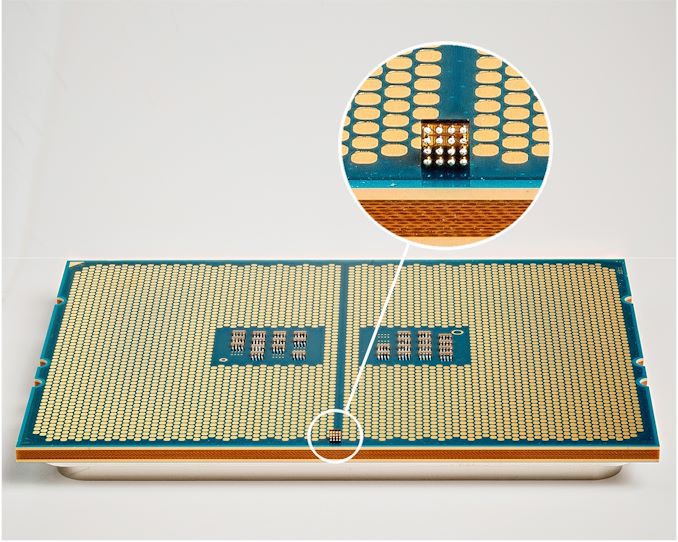 IC: Your PR team sent a strip of those tiny FPGAs to me. When I opened it, I wondered what they were! I couldn’t see them – I asked myself why have they sent me a bit of plastic? I had to get the zoom macro on my smartphone to kind of see them, and even then I still can’t read what’s printed on it.

These @latticesemi FPGAs that just arrived in the mail are smaller than 1mm x 1mm. I can hardly see them without a magnifying glass of some sort.

If I try and bite into these, they’ll get consumed. Maybe I can use them as sprinkles. pic.twitter.com/BHbxrH0HbQ

IC: You’ve been CEO at Lattice for three years now, and I think most of our audience may recognize you from the three years you spent at AMD in charge of the client division as Ryzen was first launched. I’ve looked through your history and you’ve got experience as a CPU architect at Intel, strategic planning and marketing on networking silicon for LSI, and your academic background is a Masters in EE from MIT. What ends up drawing you from architecture, to planning, to networking, to processors and graphics, and now to Lattice?

JA: The way that you said that, it makes it sound like I can’t hold down a job, right?! [laughs]

I would say the common thread through my career is always that I’ve worked in the semiconductor industry – but you’re right, and I’ve worked in a number of different functions. I started as a CPU architect at Intel working on Xeon and Itanium chips. But I’ve worked on multicore DSP chips, really complicated network processors used in communications, lots of ASICs, CPUs for client devices, graphics, and now FPGAs. So the common thread is always within the semiconductor industry. I think that, for me, the semi industry is really exciting, because it’s basically the foundational layer of the entire tech industry. It is the fundamental substrate of the rest of the industry and it’s pervasive in our lives. Anytime you touch an electronic device, you’re touching the semiconductor industry in some way. So I’m just fascinated by the whole spectrum of devices built in the semi industry, and so now the opportunity to work on FPGAs at Lattice. The semi industry is great, and I like all parts of it.

IC: Every time I seem to mention FPGAs in my work, comments always arise as to ‘why not just build an ASIC?’. Can you explain why Lattice’s customers, or anyone that uses an FPGA, chooses to do so over dedicated hardware or a software solution?

JA: There are both technical reasons and there are also economic reasons.

On the technical side, a lot of times our customers are trying to innovate on their system designs. They’re trying to figure out how they can add new features or new capabilities that differentiate them in the marketplace. A lot of times [the solution is] an FPGA, which is incredibly customizable and…