In a move that could be setting the table for Betterment to begin offering direct indexing capabilities for advisors, Betterment for Advisors is dropping investment minimums and overhauling its software. With introduction of custom model portfolios, advisors no longer have to meet a $2.5 million investing minimum, which was once required. In addition, Betterment has overhauled its backend systems, reducing the need for advisors to work directly with the Betterment trading and investing teams and making it easier for advisors to build their own portfolios by accessing the over 1,500 available ETFs.

While Betterment is making its custom model portfolio feature available to more advisors, the heart of the feature remains largely the same as what was quietly introduced earlier this year.

Advisors can select from a menu of ETFs (for all practical purposes, individual securities are not yet supported on the platform), adjust the allocation for those funds to match up to 10 different client risk levels, decide how quickly to transition from an existing portfolio to a new portfolio—and to consider tax consequences during that transition—as well as assign the portfolio to a client.

Presently, advisors are bound to Betterment’s capital market assumptions, but they will soon be able to review and edit those assumptions too. Tasks such as tax-loss harvesting and rebalancing are already automated.

When first announcing the feature, Betterment cited cost of portfolio construction and maintenance as the reason it required a minimum. An improvement in “operational capabilities” has reduced that cost and it no longer needs to be supported with an investment minimum, said Jon Mauney, general manager for Betterment for Advisors.

“It used to be that you had to come to us and we would work with our operations team and our trading team and our investment analysis team to be able to actually put these portfolios together,” he said. “Now that’s entirely in the hands of the advisor.”

While they may be able to build portfolios more easily, advisors are still limited by Betterment’s investment menu.

Crypto investments like those offered by iCapital Network and Grayscale or Wealthfront, for example, are not available. “Our general opinion is that stuff is still kind of stupid expensive,” said Mauney. “We want to provide efficient access to asset classes. Crypto is an increasingly important asset class. If we get to the point where we believe that this is efficient access, we trust the fundamentals and we trust the cost and that kind of thing—it’s certainly something we can consider.”

Individual stocks are still not largely available either, at least for now.

But in a preview of the overhauled portfolio feature offered to WealthManagement.com, elements of the platform’s backend suggest direct indexing capabilities are on the horizon. Advisors building their own portfolios construct what are called “Security Groups” from a dropdown menu of available ETFs, under a heading called “Securities.” 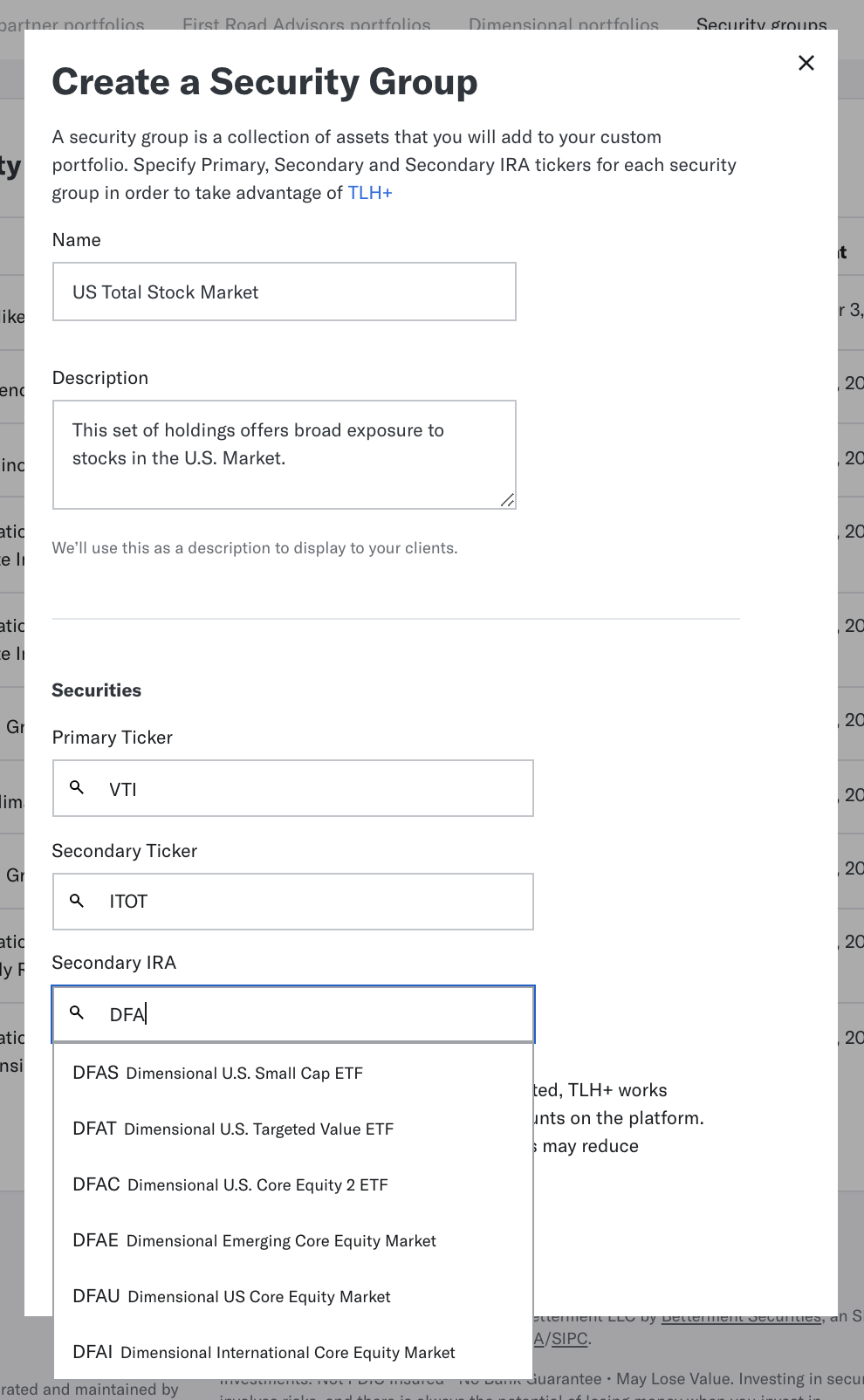 “The idea for us internally is that this is a flexible concept, and we didn’t want to lock ourselves down into anything too specific right now,” said Mauney. “We’re of course interested in direct indexing, because it’s an interesting space. There’s a lot of things that we need to do on our side to be able to put out an excellent product around that, but it’s definitely something we’re interested in the long run.”

Direct indexing at Betterment for Advisors could happen, added Mauney, “maybe sometime in the future.”

The possibility appears increasingly likely given available capabilities. Although Betterment custodies its own assets, it uses Apex Clearing in its trading tech stack. Apex has been offering support for fractional-share investing, a feature foundational to direct indexing, for years.

If Betterment sees direct indexing on the horizon, it’s not alone. Vanguard bought direct indexing tech firm Just Invest this summer, in a first for the asset manager. Just Invest was founded in 2016 and has over $1 billion in assets under management. Vanguard has already been running a pilot program to its RIA clients over the past year and half, powered by Just Invest. Betterment competitor Wealthfront also offers a version of direct indexing.

The technology, however, is not a silver bullet. Now-shuttered RobustWealth began offering the feature three years ago. Its advisor-facing business was closed this year.

Meanwhile, the custom model portfolio interface used by advisors was overhauled to make it more user friendly, said Mauney. The firm is in the midst of migrating Betterment’s retail and business lines to the same foundation used by the advisor business.

As portfolio customization gains prominence at Betterment, executives have considered offering a model marketplace, said Mauney, but it doesn’t appear to be gaining much traction. Betterment already offers third-party models from Vanguard, BlackRock and Goldman Sachs, and it has an agreement with Dimensional Fund Advisors to offer portfolios. “We’ve done a lot of talking about the idea of a model portfolio marketplace,” Mauney explained. “One of the things we come back to is that we don’t necessarily feel the need to go out of our way to highlight any of these portfolios, now that you can build whatever you want on our platform.”

Betterment for Advisors has over 600 firms on its platform, said Mauney, with a “barbell situation” of very large firms that desire to segment clients, on one hand, and firms with under $150 million that want more automation. “We’re encouraging our existing firms to consolidate more of their book of business on our platform,” he added, noting that the increased accessibility of custom model portfolios has now eliminated a major reason firms were reluctant to completely switch.

Advisors should be encouraged by the improvement, Mauney concluded. It aligns with CEO Sarah Levy’s commitment to move Betterment for Advisors “to the front of the queue,” he said.

“It was not a trivial investment on our side,” he said. “We did a non-trivial overhaul of our backend to be able to accommodate a wider set of models going forward in a way that’s going to immediately benefit us; but also eventually benefit our other lines of business.”