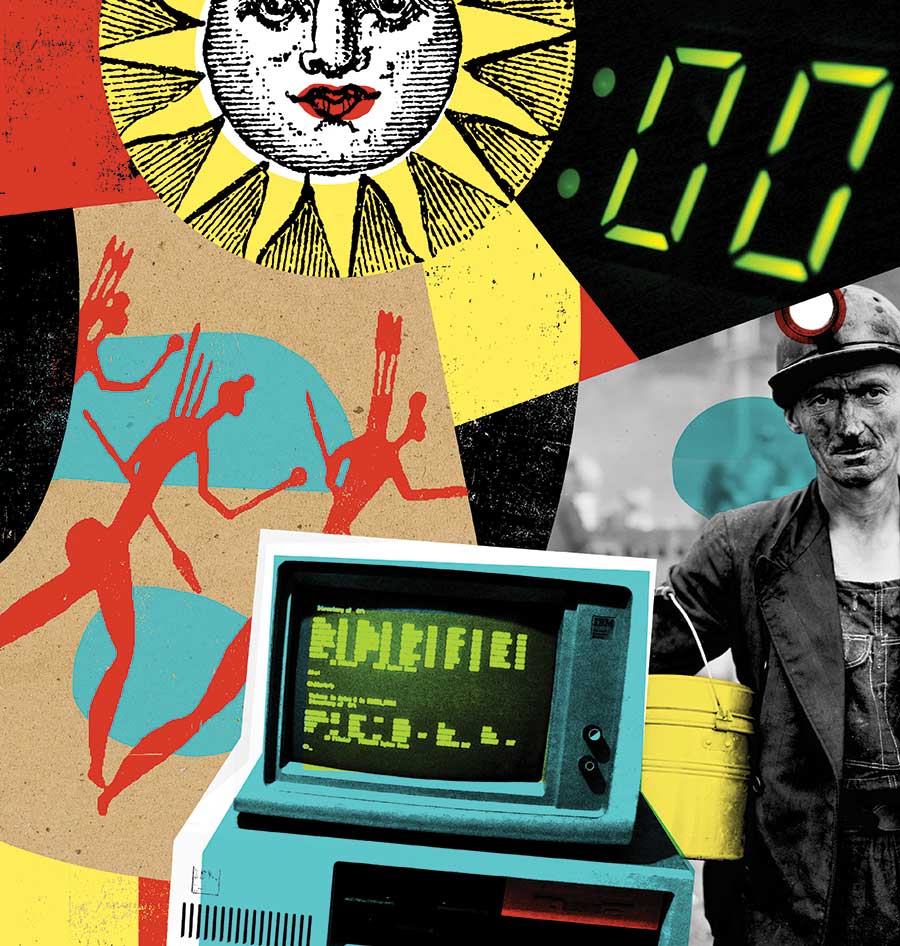 We have named the era of runaway climate change the “Anthropocene,” which tells you everything you need to know about how we understand our tragic nature. Human beings are apparently insatiable consuming machines; we are eating our way right through the biosphere. The term seems to suggest that the relentless expansion of the world economy, which the extraction and burning of fossil fuels has made possible, is hard-wired into our DNA. Seen from this perspective, attempting to reverse course on global warming is likely to be a fool’s errand. But is unending economic growth really a defining feature of what it means to be human?

For the longest part of our history, humans lived as hunter-gatherers who neither experienced economic growth nor worried about its absence. Instead of working many hours each day in order to acquire as much as possible, our nature—insofar as we have one—has been to do the minimum amount of work necessary to underwrite a good life.

This is the central claim of the South African anthropologist James Suzman’s new book, Work: A Deep History, From the Stone Age to the Age of Robots, in which he asks whether we might learn to live like our ancestors did—that is, to value free time over money. Answering that question takes him on a 300-millennium journey through humanity’s existence.

Along the way, Suzman draws amply on what he has learned since the 1990s living and dissertating among the Ju/’hoansi Bushmen of Eastern Namibia, whose ancestral home is in southern Africa’s Kalahari Desert. The Ju/’hoansi are some of the world’s last remaining hunter-gatherers, although few engage in traditional forms of foraging anymore.

Suzman has less to say in Work about his years as the director of corporate citizenship and, later, the global director of public affairs at De Beers, the diamond-mining corporation. He took that job in 2007. Around the same time, in response to a public outcry after the Botswanan government evicted Bushmen from the Kalahari so that De Beers could conduct its mining operations there, the company sold its claim to a deposit to a rival firm, Gem Diamonds, which opened a mine in the Bushmen’s former hunting grounds in 2014. It later shuttered the mine and then sold it in 2019, after reportedly losing $170 million on the venture.

Suzman’s employment with De Beers—a company that has spent vast sums on advertising to convince the world’s middle classes that diamonds, one of the most common gems, are actually among the scarcest—may have left its mark on Work nonetheless. “The principal purpose” of his undertaking, Suzman explains, is “to loosen the claw-like grasp that scarcity economics has held” over our lives and thereby “diminish our corresponding and unsustainable preoccupation with economic growth.” It is an arresting intervention, although one that reveals the limits of both contemporary economics and anthropology as guides to thinking about our era of climate emergency.

For 95 percent of our 300,000-year history, human beings have lived as hunter-gatherers on diets consisting of fruits, vegetables, nuts, insects, fish, and game. Ever since Adam Smith published The Wealth of Nations in 1776, it has largely been taken for granted that staying alive was an all-consuming activity for our ancestors, as well as for the remaining hunter-gatherers who still lived as they did. Latter-day foragers appeared to have been “permanently on the edge of starvation,” Suzman explains, and “plagued by constant hunger.”

This disparaging perspective on the life of the hunter-gatherer found ample support in Western travel narratives and then in ethnographic studies. Explorers treated contemporary foraging peoples as if they were living fossils, artifacts of an earlier era. In reality, these foragers were living in time, not out of it, and trying to survive as best they could under adverse historical conditions. Expanding communities of agriculturalists, like both colonial empires and post-colonial states, had violently pushed most foragers out of their ancestral homelands and into more marginal areas. Western reportage has made it seem as if these dispossessed refugees were living as their ancestors had since time immemorial, when in fact their lives were typically much more difficult.

A countercurrent of thinkers has provided a consistent alternative to this largely contemptuous mainstream perspective. The 18th-century French philosopher Jean-Jacques Rousseau, for example, took the forager to be an unrealizable ideal for modern humans rather than our embarrassing origin story. In the 20th century, anthropologists Franz Boas and Claude Levi-Strauss continued this tradition: They countered racist, stage-based theories of human evolution by showing that foraging peoples possessed complex and intelligent cultures. These thinkers form important precursors to Suzman’s perspective, but, in Work, he sets them aside.

Instead, Suzman focuses on the comparatively recent “Man the Hunter” conference, co-organized by the American anthropologist Richard Lee. That 1966 gathering marked a decisive shift in how anthropologists thought about foragers as economic actors, and this is the point that Suzman wants to emphasize. Lee had been conducting research among the !Kung Bushmen of southern Africa, a people related to the Ju/’hoansi. Lee showed that the !Kung acquired their food through only “a modest effort,” leaving them with more “free time” than people in the advanced industrial societies of the West. The same was likely true, he suggested, of human beings over the largest part of their history.

One implication of this finding is that economists since Adam Smith have been consistently wrong about what Lee’s colleague Marshall Sahlins called “stone age economics.” Using modern research methods, social scientists have confirmed that Lee and Sahlins were largely right (although they may have underestimated foragers’ average work hours). The chemical analysis of bones has demonstrated conclusively that early humans were not constantly teetering on the brink of starvation. On the contrary, they ate well despite having at their disposal only a few stone and wooden implements. What afforded these early humans existences of relative ease and comfort? According to Suzman, the turning point in the history of early hominids came with their capacity to control fire, which gave them access to a “near-limitless supply of energy” and thereby lightened their toils.

Fire predigests food. When you roast the flesh of a woolly mammoth—or, for that matter, a bunch of carrots—the process yields significantly more calories than if the food was left uncooked. The capacity to access those additional calories gave humans an evolutionary advantage over other primates. Whereas chimpanzees spend almost all of their waking hours foraging, early humans got the calories they needed with just a few hours of foraging per day.

Mastering fire thus made for a radical increase in humanity’s free time. Suzman contends that it was this free time that subsequently shaped our species’s cultural evolution. Leisure afforded long periods of hanging around with others, which led to the development of language, storytelling, and the arts. Human beings also gained the capacity to care for those who were “too old to feed themselves,” a trait we share with few other species.

The use of fire helped us become more social creatures in other ways as well. Recently unearthed evidence has demonstrated that early humans did not live in small bands for the whole of their existence, as anthropologists and archaeologists had long supposed. Where food was less abundant, people spread out, keeping enough distance from one another to ensure an ease of acquisition. By contrast, where food was abundant, early humans gathered into larger, albeit temporary social formations. At Göbekli Tepe in southeastern Turkey, archaeologists uncovered a major complex of “chambers and megaliths” that had been periodically built up and reburied from around 10,000 years ago—long before the advent of settled agricultural societies.

These findings support a surprising thesis, one that reverses everything we used to believe about the deep history of humanity. It was not the hunter-gatherers who “suffered from systematic dietary deficiencies,” working themselves to the point of exhaustion yet attaining no lasting security. On the contrary, their descendants among the farming peoples were the ones who lived like that. In contrast to the hunter, the peasant eked out an existence that truly was, in Thomas Hobbes’s famous phrase, “nasty, brutish, and short.” As Suzman explains, this shift in how we understand the relative fortunes of hunter-gatherers and early agriculturalists makes the three major transitions that followed fire—for Suzman, agriculture, the city, and the factory—much harder to explain. Their advent cannot be told as a progressive story of humanity’s climb out of economic deprivation.

To see why debates about human origins carry so much significance, you need only turn to the first page of any economics textbook. There you will discover the “scarcity postulate,” the theory that human beings have infinite needs and wants but only a limited quantity of resources. You experience the truth of this principle every time you open your banking app and discover that you can afford only a portion of what you’ve placed in your online shopping cart. This leads to an endless series of calculations: In order to have this, you must forgo that.

Economics positions itself as the study of how the choices we make under the constraints of scarcity facilitate the allocation of our productive capacities. Every gain in economic efficiency loosens those constraints just a bit, so…

Read More:Do We Need to Work?