As rotor blades get ever longer, manufacturers are looking for ways to automate the still many manual steps involved in their serial production. Dutch high-tech industry solutions developer and equipment supplier TebuloRobotics recently gave a precision blade coating demonstration of their latest autonomous mobile robot (AMR) vehicle designed with this in mind.

During the demonstration with a short-straight-scaled blade section, each time the AMR completed a partial coating task, it would move autonomously to a new predetermined position, temporarily lock its wheels before working on the new section and then move on again.

The AMR’s four electrically driven 360-degree rotatable wheels allow it to move precisely and without restrictions in all directions. The vehicle further incorporates many other innovative features, including cutting-edge external guided motion (EGM) technology for following complex three-dimensional turbine-blade shapes and curvatures, without requiring detailed product dimensioning to be pre-programmed into the robot. 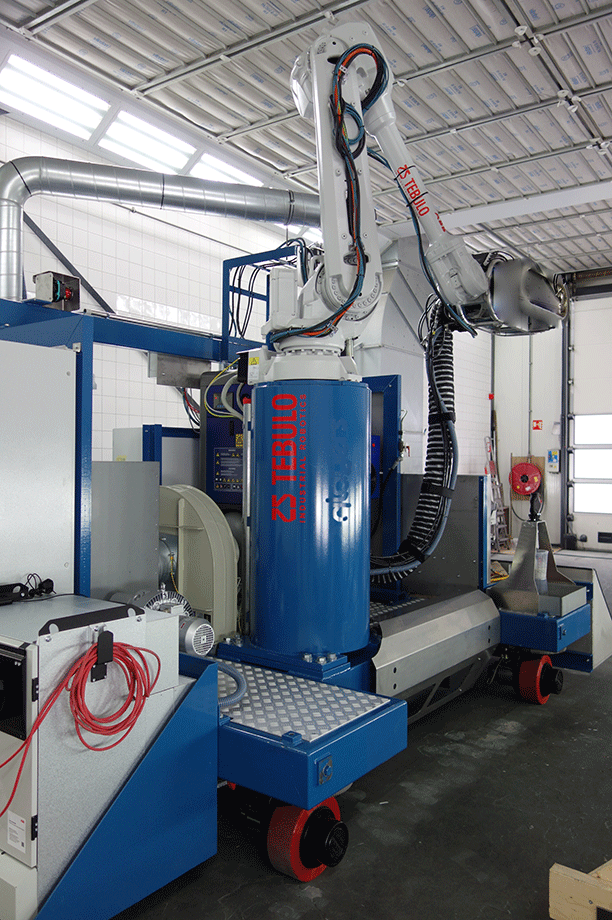 “The AMR, being functionally a multi-purpose tool carrier, carries all its necessary supplies like paint containers in blade-coating application mode,” explains Hans Spaans, technical director at TebuloRobotics. “It also incorporates all computerised industrial PC and programmable logic controller (IPC/PLC)-based controls to enable the vehicle’s own autonomous movements and to operate the industrial ABB robot plus application device(s) for conducting specific tasks.”

To perform precision coating of a blade, the advanced spray head developed by Dutch start-up Qlayers is attached to the robot’s arm. Additional integrated support systems include a surplus-paint-particle removal provision with built-in suction and cleaning filter units, all incorporated within the carrier vehicle. “Cleaned” air is then released again in the coating space through vents in the vehicle’s bottom section.

Following the successful proof-of-concept test of the scaled demonstrator (right) with a 3.5-metre vertical reach at a rented facility near Leiden, the Netherlands, the hi-tech unit will be shipped at short notice to an unnamed customer working towards the anticipated full-scale product launch — with a reach of 8 metres — this summer.

Here it will perform a series of trials to demonstrate the AMR’s capabilities and potential as a major leap forward in automating processes requiring high levels of precision, which are currently done manually during rotor-blade serial production.

The next envisaged step, after completing these demonstration and validation trials, is building a full-scale AMR developed along the same main principles, says Spaans. “Our goal is to complete this full programme until the product’s launch within the next six months,” he adds.

“One of the product’s key characteristics is to make it highly flexible for autonomously performing multiple, automated tasks in different industries, including wind. It could carry out multiple processes during typical rotor-blade production, at different manufacturing stages.”

The AMR could, for instance, autonomously apply glue all along the edges of one shell before a blade mould containing two shells and all internal components is closed. After the cured blade has been taken from the mould, the carrier vehicle could be redeployed for deburring the blade seams with an electrical cutting tool mounted to the robot arm. 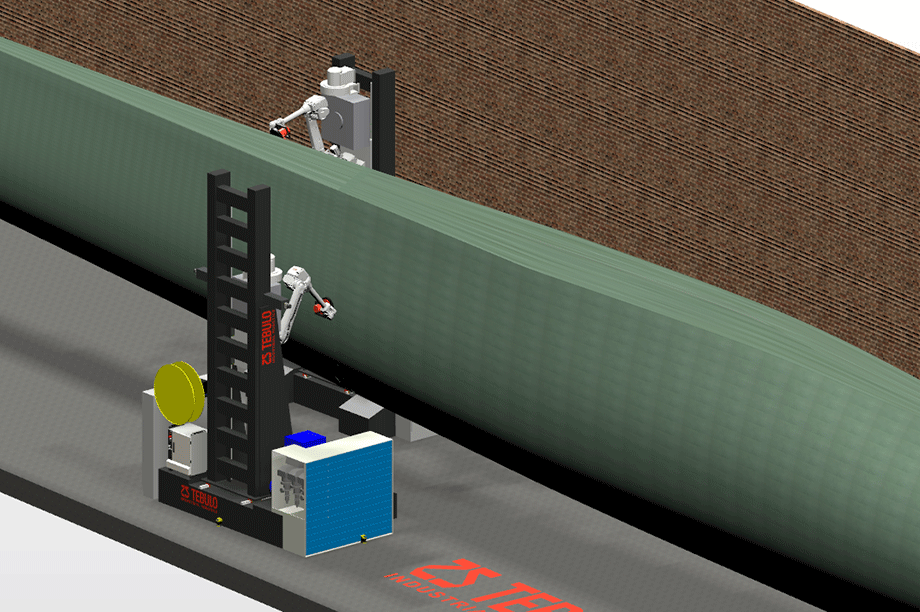 Pieter Oord, TebuloRobotics’ business developer, gives some more insights into the inner workings of the in-house developed and built AMR. “The vehicle has two built-in sensors to control the precision movement, including to predetermine logical pathway and real-time position coordinates,” he said. “They also check the required precise distances to a specific object, like the blade surface, along the longitude axis and relative to the blade surface. A great overall benefit of AMR-type systems is their built-in capability for achieving high accuracy levels by using EGM technology.”

For this EGM-enabled control, up to four additional positioning sensors are integrated into the robot’s head to accurately steer and control the movements of the ABB robot arms with a dedicated application tool.

ABB Robotics sales engineer Martijn Dubbelman is the matchmaker who connected TebuloRobotics and Qlayers about two years ago for this ambitious project. He recalls how it started: “We already had an excellent professional relationship with TebuloRobotics, having cooperated on many projects over 25 years, and saw opportunities for teaming up with these two hi-tech companies. Wind-turbine rotor blades are a key example where advanced automation can offer huge potential, especially when combined with AMR deployment.”

These blades are large-scale structures characterised by complex three-dimensional shapes and curvatures and continuing to grow in size. This combination of factors was the main reason ABB Robotics thought it worth investigating how the three companies could jointly create added value.

Developing the AMR to carry out robotised coating and other complex application activities involving the latest and largest rotor blades of 100 metres or more brought some major challenges, as Spaans recalls.

“We used a generic 100-metre reference blade for our system modelling and AMR design input, with a 6-metre-range chord length [largest width] and around 7-metre pre-coning. Another key factor that needed addressing is the blade’s unavoidable sagging behaviour due to its own length and mass.” As a result, the built-in sensors recognise the position of a surface to be processed in real time. This means changes in object position resulting from structure sagging or other factors are no longer a problem, unlike in a conventional “rigid” system layout.

TebuloRobotics’ design team initially looked into such conventional guided-rail or gantry-type solutions for industrial robots or robot-mounting. However, both options ultimately lacked the flexibility necessary for performing the complex tasks and were abandoned. The decision was made to focus on AMR-technology, which has the huge added benefit to be capable of moving and operating fully autonomously. All it requires is a relatively smooth factory floor without obstacles, and no other modifications to an existing “conventional” blade production plant are necessary. 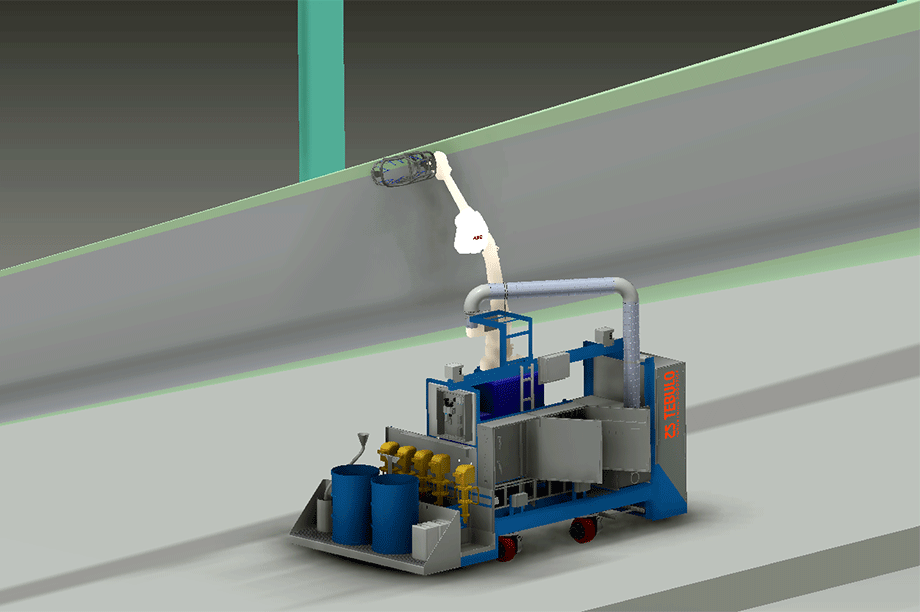 Oord says: “The fully automated, autonomous operating mode enables the AMR to ‘search’ for a specific blade to be coated, grinded or whatever, with all the main object parameters already stored inside the unit and ready for use. It does not need specific aerodynamic blade design input for a dedicated task, and there is also no need to accurately place an object in a given physical space like a spraying hall. This is because the sensor-controlled AMR-positioning robot, in combination with up to six sensors, automatically recognises the ‘wanted’ object and all relevant parameters, including curvatures and distances to specific surfaces. The AMR-system then performs a given task.”

Programmed to be versatile

Another key factor and main development challenge is that 99% of all robots deployed in industry are “hard programmed”. This means they are “fit” to carry out specific, repetitive operational tasks, and they do this typically within 0.02mm positioning accuracy range.

The AMR and application devices such as the precision coating tool must also operate within a high-accuracy range. In addition, it requires advanced dedicated robot programming to perform time-specific movements and tasks in different physical locations. This is why TebuloRobotics developed a new set of software-based AMR tools and controls, a process that continues for further matching and integration with various application devices.

Spaans hopes a full-scale AMR could be implemented in about one year after the coating demonstrator trials have been successfully completed and the client has given the green light.

“To perform all envisaged tasks with the latest generation large-scale rotor blades, this 1:1 scale AMR requires a much larger reach, so that it can cover 6-7 metre vertical distances, along the blade aerofoil from top to bottom, for example. The enabling feature for this is a vertical guiding beam for the integrated positioning robot, which can move up and down over the full processing distance,” he explains.

For specific coating tasks, the blade is positioned with the rounded leading pointing downward and the trailing edge with semi-standard flat-back aerofoil facing upward.

An optimised layout for workflow requires two AMRs per blade, one on each side, but there could logically be different configurations for other specific tasks. 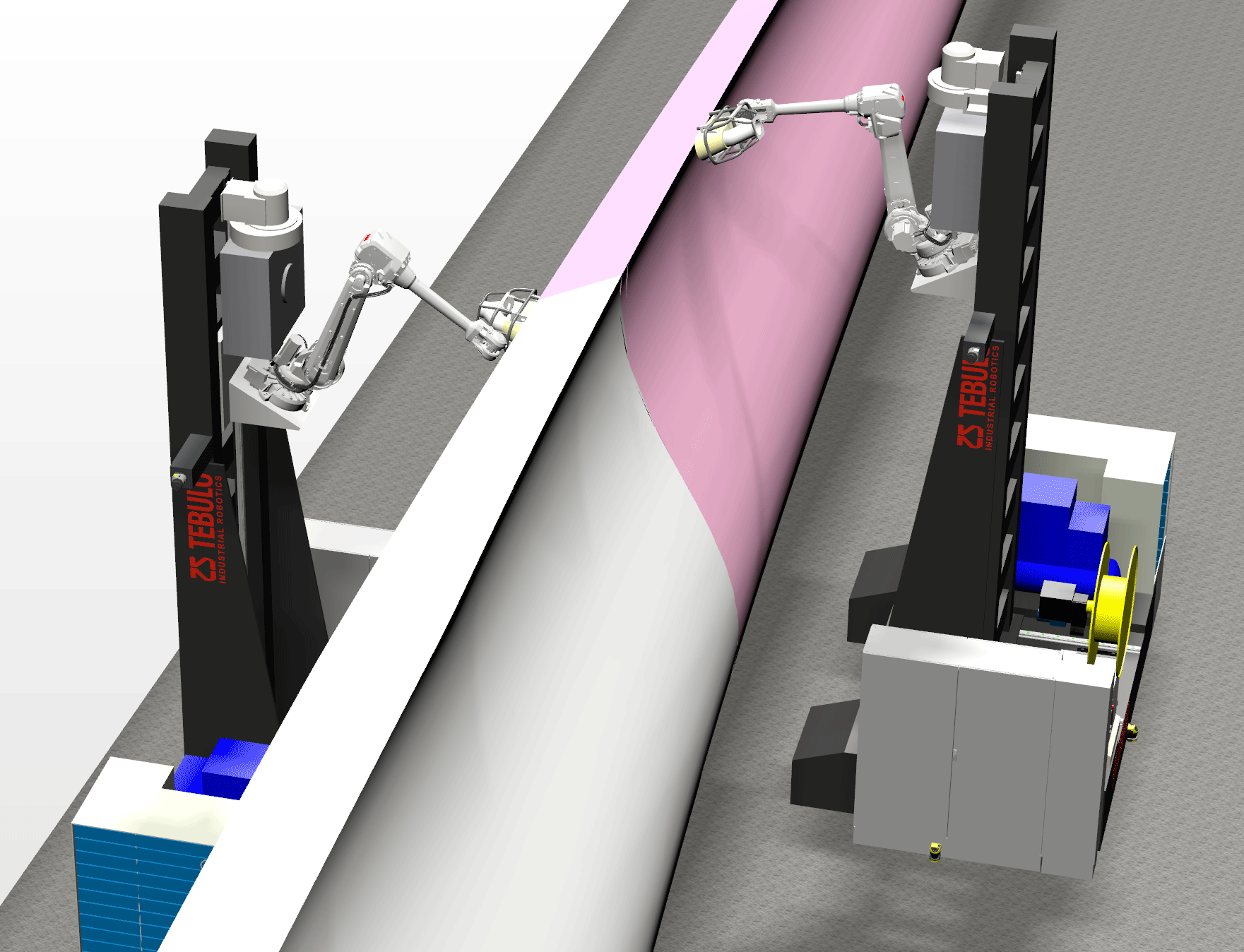 Blade coating should ideally start at the blade root section, Oord suggests, with each AMR moving in predefined steps towards the blade tip. Calculations indicate that two AMRs could coat a complete 100-metre blade in about 1.5 hours, or three hours net when both a primer and closing top layer are applied. With the possibility of future single-coating solutions available, coating time…