As AV moves increasingly into the mainstream of corporate life, the arguments for connecting it to the network grow ever stronger.

“Any equipment that must connect to other pieces of gear is a candidate for networking, because it removes the restrictions imposed by legacy point-to-point connections,” says Brad Price, senior product marketing manager at Audinate. “A projector, for example, can receive input from any network source, and AV from conference spaces or at events can be instantly presented at multiple locations for broader dissemination, recording, and editing. While simple point-to-point connections are sufficient for many current tasks, networking opens many more possibilities for the future.”

Transporting video traffic can impose huge strains, on both the network’s bandwidth and the tempers of those who run it (we’ll come to this later). But other networked AV functions are less controversial.

Control systems
Another common application is control. “Control systems have utilised networks for some time to monitor, control and update equipment via a central management suite, such as Extron or Crestron, along with cameras, audio, sensors, video conferencing and codecs,” says David Corker, HE/FE sales manager at integrator, CDEC. “This is low bandwidth, and can range from a full system to a number of screens. This flexibility, scalability and adaptability are key benefits of networked AV.”

Networking is not always the best solution, however. “There’s always a premium cost associated with AV-over-IP networking, so smaller, single-room systems with a limited number of inputs and outputs (such as a typical conference room with a single display and a couple of table inputs) are better served using conventional switchers with HDBaseT video extension,” says Paul Beals, sales engineer at Atlona.

Security and performance have tended to be the other main issues for networked AV. With the latest AV equipment, security concerns should largely be a thing of the past, argues Andy Walsh, AV services director at LMG. Older devices may have been less secure, but currently most connected AV devices have multi-layer security capabilities encompassing SSH, TLS, HTTPS, AES encryption, LDAP, and 802.1x. “If these are applied correctly, together with robust network configuration, security issues should be of minimal concern.”

Performance, however, remains a major headache. In an ideal world, organisations would amalgamate their AV traffic into existing IT networks, obviating the need for extensive new trunk cabling and sharing the ongoing costs between AV and IT. But who lives in an ideal world? 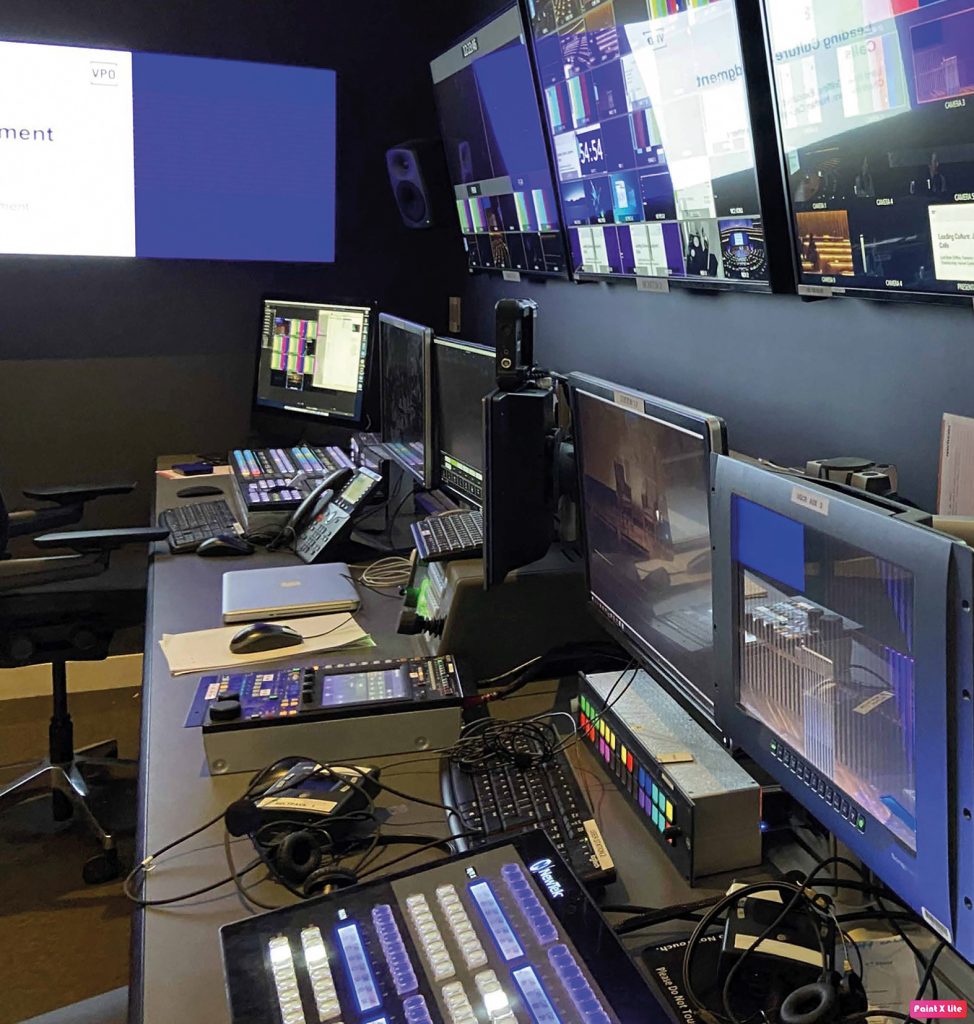 “The load that AV signals place on an IT network is vastly different from that of computers and general IT equipment,” explains Chris Hawes, a partner at consultancy, Kromers. “AV signals require constant throughput and, in some cases, massive bandwidth. In general, IT networks rely on the fact that not all the peripherals pull data all the time, so bandwidth is shared and dynamically throttled.”

Signal quality
An equally important difference is signal quality. “AV-over-IP traffic is sensitive to network jitter and spikes in congestion,” says Andrew Starks, director of product management at Macnica, and an AIMS board member. “AV-over-IP latency is often under thirteen milliseconds from the source to the display, so even small disruptions can noticeably degrade performance.”

This generally leaves buyers with two choices. One is to utilise the main IT network but prioritise AV traffic to ensure smooth performance. “Guaranteed bandwidth through VLAN prioritisation is a must, so the majority of installations now take place within VLAN layers, virtually segregating traffic but enabling touch points to other VLANs where required,” says Liam Hayter, senior solutions architect at NewTek.

The other option is to create a separate network for AV traffic. “A discrete network is easiest to support and troubleshoot, and is usually the recommended route for a first foray into AV-over-IP,” says Hayter. “Once networking, IT and AV teams are confident with a discrete network – and with the right planning up front – this can then be integrated into existing IT and networking infrastructure.”

Because of AV’s potentially huge bandwidth requirements, plus some legacy concerns about security, IT networking managers are notoriously reluctant to let it loose on their networks, and getting them on-side is likely to bulk large on any project manager’s to-do list.

“A key to success is building a project team that includes IT and networking teams from day one, rather than just dropping a solution on them,” says Hayter. “Another important – and commonly overlooked – aspect is not treating AV-over-IP like just any other network, but bringing in the right expertise to help educate IT and network teams to get the most out of their chosen deployment.”

Hawes recommends providing the IT networking team with “worst case” figures (all the AV hardware running at maximum bandwidth). AV signals passed over IP networks vary in bandwidth from 800Mbit/sec to 10Gbit/sec, depending on the resolution and compression being used. Maintain a spreadsheet that allows you to present the figures, he maintains.

Faster bandwidth continues to become more commoditised, particularly Ethernet which is seeing large year-on-year reductions in cost per port, according to Rob Green, senior manager for pro AV at Xilinx. “Almost as many 10GE (gigabit Ethernet) ports are being shipped as 1GE, with 25GE likely to overtake both in the next three to five years,” he says, and adds that with 25GE you can effectively transport a couple of uncompressed 4K60 4:2:2 10-bit video channels (an easy rule of thumb is that uncompressed 4K60 requires 12G-SDI or c. 12Gbit/sec). “So bandwidth will become less critical over time.”

Green concedes that innovation in AV will drive bandwidth requirements up again (uncompressed 8K resolution would need c. 48Gbit/sec, for example). Fortunately there is always compression, ranging from “lightweight” mezzanine codecs to high compression codecs, such as H.264/H.265. A mezzanine codec can lightly compress 4K into 10GE, while with high compression it can be squeezed on to an old 1GE network without requiring a complete upgrade.

Price reckons there is no simple calculation for network bandwidth.

“It’s a complex function of individual devices and network topology, and much common data is ‘bursty’ and irregular in nature, meaning it varies over time. Smart network designers know how to design networks such that high bandwidth devices don’t create bottlenecks for other network traffic, by carefully considering the pathways data must traverse between switches. A network may have very high traffic in one area and very little in another, even though it’s a single connected system.”

Performance metrics
While bandwidth is important, other network performance metrics and features should not be overlooked, argues Starks. “These include network switch buffering, jitter, and PTP (Precision Time Protocol) features that are needed in some advanced systems, such as boundary clock and transparent clock. Knowing how much bandwidth your switches can handle internally and how much they can send over their uplink connections to other switches are also significant considerations.”

There is a distinction between internal and external systems, believes Trent Wagner, audio product manager at QSC. “Bandwidth is most critical on the local infrastructure when utilising high-bandwidth, realtime media. Bandwidth to the internet or cloud systems is not often a bottleneck, unless implementing a large amount of wide area streaming, internet broadcast/ingest, or off-site storage.”

The cloud is an established option for some aspects of networking AV. “It’s become more important to AV as manufacturers have virtualised some of the more complex functionality that used to require lots of hardware, such as large AV switches and vision mixers,” says Hawes. “The likes of VMix, NewTek and Sienna offer strong solutions that remove the need to purchase hardware that later becomes obsolete. Although heavily compressed, running everything virtualised allows content to be routed from anywhere in the world, and it’s well suited to content that’s to be consumed on the internet.”

“The important contribution cloud can bring to AV is the soft codec capability to allow connections to collaboration tools and video conferencing platforms, especially as teams have become more remote and BYOD needs are growing,” says Felix Knight, UK&I managing director of Lightware.

“The overheads of maintaining and updating a fleet of rack mounted or plenum-hidden boxes are outweighing the advantages of local hardware, and this is only increasing given the events of the past year. Cloud services should be elastic, fault-tolerant, and scalable, and can make financial sense. But not all cloud offerings are equal, so we’d advise not choosing cloud for cloud’s sake, and looking for cloud-native solutions.”

High quality, low latency video is still beyond the capabilities of the cloud, argues Beals. “For 4K AV-over-IP solutions the…

Read More:Making networks work for you