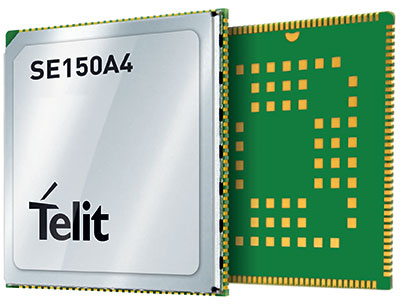 Telit has launched the SE150A4 system-on-module series with an embedded multi-constellation GNSS (GPS, BeiDou, GLONASS and Galileo) receiver for high-performance positioning and navigation.

The SE150A4 module is designed for retail and point-of-service (POS) devices, home automation and security, law enforcement and other applications that need high data rates, advanced human-machine interfaces and edge-computing functionality. It features the Android OS and the Qualcomm QCM2150, and is designed to serve internet of things (IoT) device makers and customers.

With LTE Category 4 for maximum data rates of up to 150 Mbps downlink and 50 Mbps uplink, the SE150A4 series is designed for bandwidth-intensive applications such as live, high-definition (1080p/30 fps) video from law enforcement cameras, home security systems and robots. Along with GNSS, Wi-Fi (802.11a/b/g/n) and Bluetooth Low Energy (BLE) 4.2 provide additional connection flexibility.

The modules are available in two versions.