Over 100 action items for improving and expanding the options of how Metro Vancouver gets around are outlined in TransLink’s detailed draft plan for Transport 2050.

The 30-year regional transportation strategy, released today for the start of a new round of public consultation, revolves around key goals of having public transit, walking, and cycling accounting for at least 50% of all passenger trips by 2050, with taxi, ride-hailing, and carsharing making up for most of the remaining passenger trips.

Other key goals include improving transportation affordability, and cutting 20% of the time that people and goods spend on congested roads in 2050 compared to today, along with the incremental climate goals of lowering greenhouse gas emissions from light-duty vehicles by 65% over 2020 levels, and the elimination of all transportation greenhouse gas emissions by 2050.

Much of this is accomplished by growing Metro Vancouver’s rail rapid transit network, with the much-anticipated, corridor-based approach now released.

TransLink is aiming to expand the network by an additional 310 km through 2050, and it has listed a total of seven projects where grade separation (such as elevated and/or tunnelled) would be a consideration. But for most of the projects, it comes short of pre-determining the corridor’s technology and whether it would be fully grade-separated, such as through an extension of the region’s existing SkyTrain system. Instead, this will be determined on a case-to-case basis when the projects are being considered for implementation. 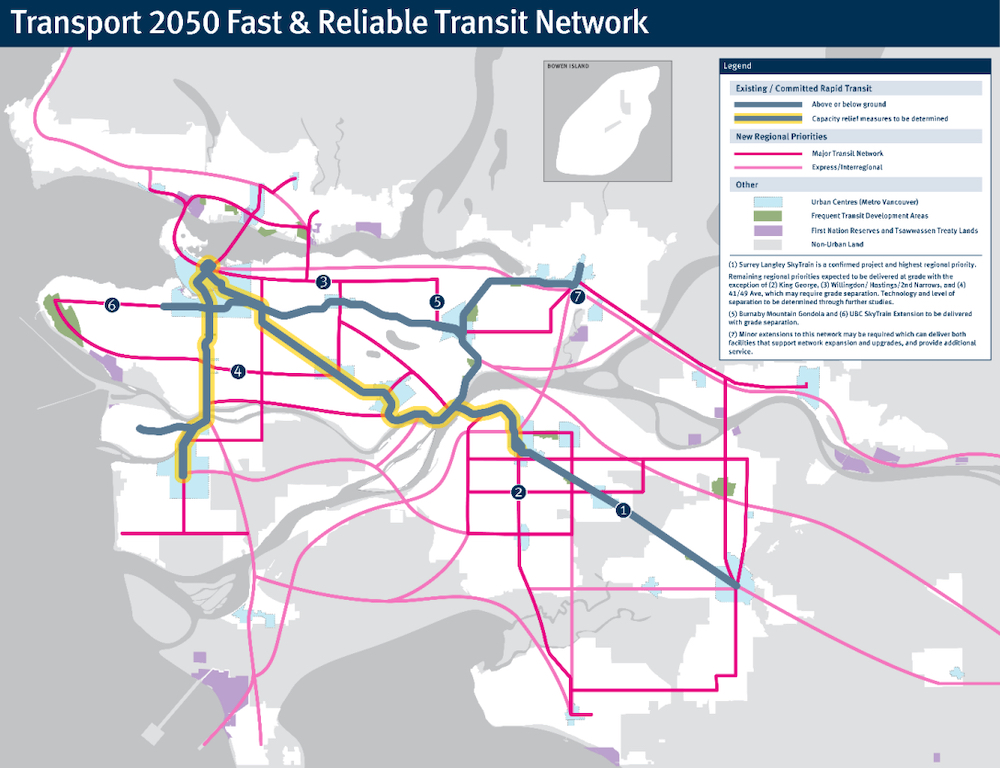 Here is a rundown of the seven project corridors where grade separation will be considered:

Other than fully-grade separated SkyTrain and subway technologies, the quadrupling of the region’s rapid transit network over the next 30 years is expected to also be achieved by light rail transit (LRT) or bus rapid transit (BRT).

Street-level options such as LRT and especially BRT are expected to be considerations for secondary corridors, where conventional transit services are unable to meet demand but forecasted demand suggests that fully grade-separated rapid transit is not needed.

High-capacity, express buses services — such as RapidBus and B-Line — have generally served as the precursor for new SkyTrain routes, as these bus routes serve to build up ridership on the corridors.

TransLink has a goal of bringing frequent local transit service to within a five-minute walk of all communities within the urban parts of the region.

The strategy also specifically identifies the Expo Line and Canada Line as systems that are in need of capacity relief measures over the next 30 years.

The Transport 2050 plan suggests the need for adding redundancy to the region’s public transit system, especially for SkyTrain, so that there are alternatives if one part of a system fails. 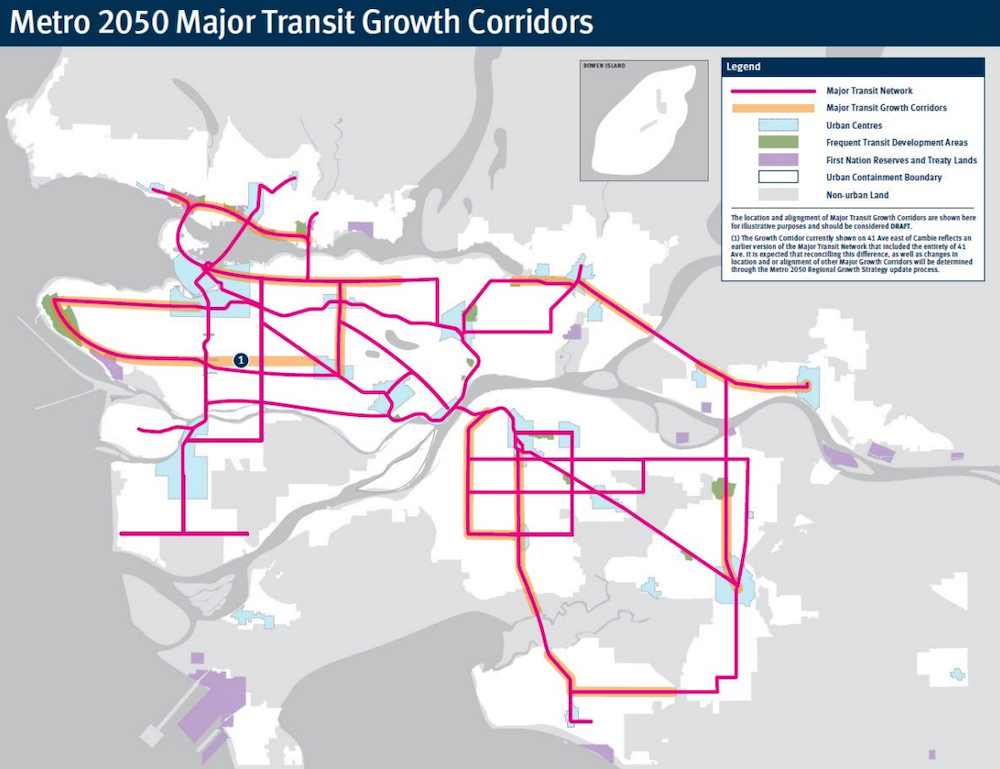 Poor reliability is increasingly an issue due to growing traffic congestion, with 80% of TransLink bus routes now running slower compared to five years earlier. TransLink intends to expand bus priority measures — such as bus-only lanes, queue jumpers, and traffic signal priority — across the region to make buses not only more reliable, but more competitive with the travel times of driving.

The region’s transit network would become more layered, such as introducing more express and limited stop bus routes that set them aside from local bus routes. TransLink has already headed into this direction with the recent implementation of RapidBus.

The strategy calls for a new additional network of dedicated express bus routes throughout Metro Vancouver and connecting to destinations deep in the Fraser Valley and Sea to Sky Corridor:

It is noted that interregional services along the Sea to Sky Highway and the Fraser Valley, which are outside of TransLink’s jurisdiction, could be operated by BC Transit, which already operates the No. 66 Fraser Valley Express from TransLink’s Carvolth bus exchange in Langley Township to Chilliwack. The Fraser Valley Regional District and BC Transit are already intending to extend the No. 66 to Lougheed Town Centre Station.

There has been an overall reduction in bus capacity along the Sea to Sky Corridor, ever since Greyhound pulled its operations in Western Canada in 2018. This void in service has not been completely filled by the remaining private operators.

As a measure to improve reliability and adopt the latest technologies, the plan mentions the possibility of a high degree in bus automation. Level 5 automation of driverless buses in any condition may still be decades away, but the public transit authority believes Level 4 automation in “well-mapped and defined cities and regions” could be commercially available within this decade and widespread by 2050.

TransLink will continue along its existing trajectory of aggressively pursuing the electrification of its buses, and potentially even SeaBus vessels. 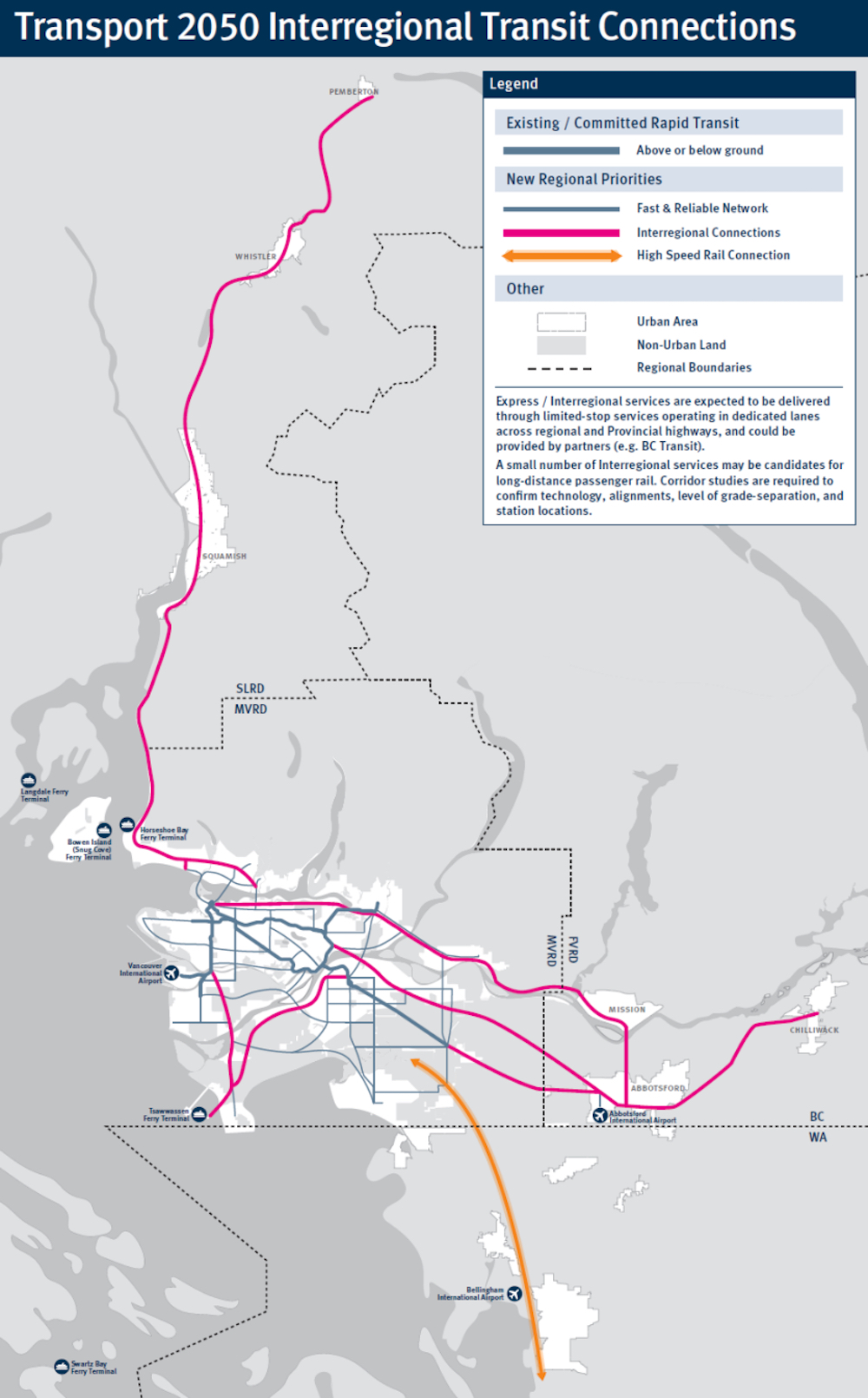 TransLink has also indicated that a small number of interregional services could be candidates for commuter passenger rail, but further studies are needed to confirm technology, routing, level of grade separation, and station locations. The strategy appears to specifically suggest improvements to the West Coast Express, including a southward extension of the route from its current eastern terminus in Mission to Abbotsford.

The potential for a high-speed passenger rail line from Metro Vancouver to Seattle and Portland is also acknowledged in the strategy.

There would be a new emphasis on transforming roads designed primarily for cars into “people-first streets,” such as through the measure of building 850 km of traffic-connected bike lanes connecting every urban centre, and expanding the availability of bike parking. 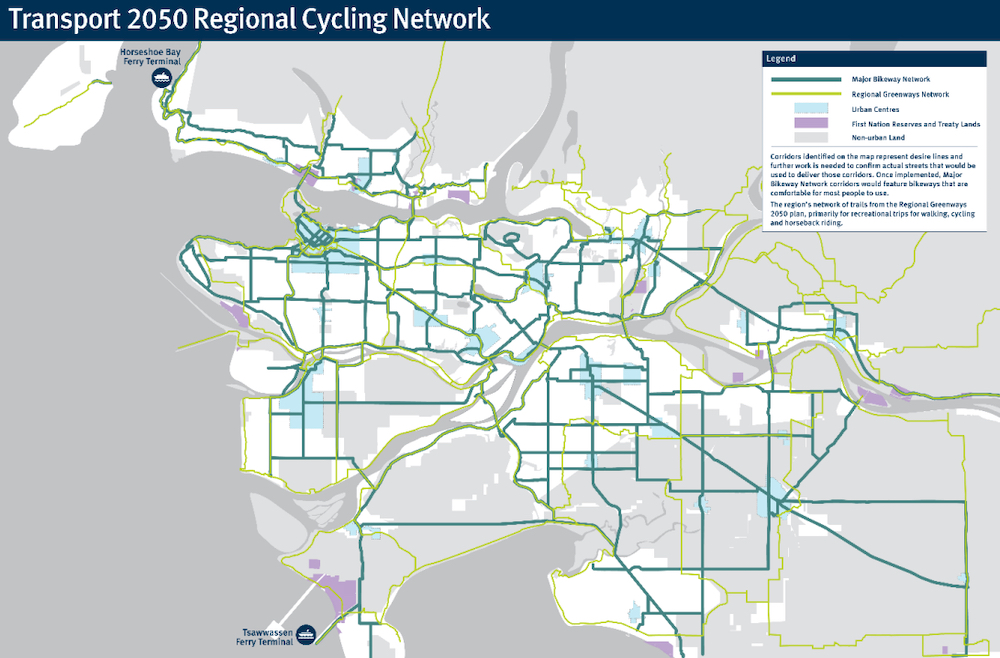 At the same time, TransLink’s plan acknowledges that a significant segment of the population relies on cars and trucks, such as people who work in trades, logistics companies, late night workers, and people who live in low density neighbourhoods where optimal public transit may be less feasible to service.

It also acknowledged that deteriorating housing affordability within Metro Vancouver’s urban centres is forcing families to pursue more affordable homes in outlying parts of the region, where there is poorly connectivity and fewer transportation options, requiring them to rely on cars for daily needs.

“To enable these trips to be made conveniently and to support the safe and efficient movement of people, goods and service vehicles we need a network of local streets with vehicle access within a reasonable walk of all properties, and a well-connected network of regional roads to carry higher volumes of people and goods, travelling longer distances, consistent with land use framework set out in the goals and strategies of Metro 2050,” reads the plan.

TransLink is looking to discourage shorter intra-regional trips by vehicle so that long-distance trips of people and goods between regions is prioritized for arterial roadways. As well, the truck route designations across the region would be increased to help facilitate the growing volume of goods and freight.

Prior to contemplating road network expansion, the plan states an effort should first be made to improve reliability and safety through road design and traffic management measures. This includes exploring regional mobility pricing (tolls) as suggested by a TransLink-led commission that explored the concept in 2018, and removing the minimum vehicle parking supply quota that must be built in new developments, especially for new developments next to frequent transit…