The move toward automation doesn’t mean a decline in demand for materials handling carts and the casters and wheels found on them. Far from it. In multiple ways, the automation trend is pulling the market for carts and casters right along with it, increasing demand for carts that will be part of automated solutions.

Cart and caster vendors often work with vendors of automatic guided vehicles (AGVs) to provide carts for tow tractor or “tugger” AGV deployments, and casters and wheels also make their way into some shuttle and automated storage solutions that make use of tracked carrier units that move on rails in the storage infrastructure. Some vendors of larger format autonomous mobile robots (AMRs) offer tow tractor AMRs that can autonomously deliver pallet-sized loads.

Automation is the source of much of the momentum in the market for casters and carts, with vendors stressing the need for high-quality casters to ensure maximum uptime for automated systems. Some cart vendors are also taking a modular approach that allows a manual cart to be turned into an automatic guided cart.

The growth of e-commerce and high volumes for many warehouses, combined with difficulty in finding enough skilled labor for positions like lift truck and tugger operators, are seen as fueling the automation trend, and in turn, influencing caster designs.

The ongoing challenge that industrial companies face in finding and keeping enough qualified frontline labor is a key driver of growth for the caster industry, says Mark Lippert, vice president of marketing with Hamilton Caster.

“The level of automation has certainly accelerated, due to issues stemming from not having enough skilled labor to carry out the volume of tasks needed by operations,” says Lippert. “So, more companies are putting in additional automation to compensate, and that drives demand for the caster market.”

While durability and strength have always been important, when casters are part of automation solutions, it makes sense to specify and use higher quality casters that will avoid system downtime and the need for frequent maintenance, even if they are more costly than a lower-end caster.

To help meet such needs, says Lippert, Hamilton has devised a line of “endurance casters” that fit onto the widely used 2-1/2 by 3-5/8-inch mounting plate size for industrial casters, but rather than being stamped, are forged with a high-strength swivel construction.

Lippert says this design and manufacturing technique provides a load capacity rating of 1,000 pounds per caster, versus the 400-pound rating found in many lower end casters that fit that mounting plate size. “With automation, many of these applications run on a 24/7 basis, so you want a caster that you can put in place once, and essentially forget about it, because they will just keep working,” he says.

Apart from durability, users are also interested in the ergonomics of casters, meaning casters that make carts easy to push, pull or otherwise maneuver. Generally, says Lippert, this means a “resilient trend” caster made of polyurethane. Wheels made with a high-quality polyurethane, he says, offer easy rolling characteristics, much like a metal wheel, but run quieter and protect facility floors better than metal wheels.

“If you go with standard, run of the mill casters, they tend to fall apart over time and users find themselves replacing casters all the time,” says Lippert. “A lot of these casters, especially within automated solutions, may not be easy to get to, so you want a high-quality caster that helps to make your automated systems worry free.”

Mobilizing the IT workstation

While some warehouses processes can be carried out effectively with rugged, mobile handheld devices, other workflows, such a printing bar codes, returns processing or accessing management information, can be made more efficient with a “workstation on wheels,” as DTG positions its products.

For example, says Shaheen, instead of having workers walk to a fixed thermal bar code printer to collect a batch of shipping labels or other types of labels such as “license plates” used for material flow tracking, a mobile IT workstation can eliminate that walking.

“Let’s say you have a process that calls for the printing of a batch of thermal bar code labels, but workers end up having to walk 100 yards to apply those labels to the correct items, pallets or containers,” Shaheen says. “Those are wasted steps that could be eliminated if you mobilize that printer on a workstation, and take it to where the labeling tasks need to take place.”

DTG’s IT carts include a lithium battery system that is hot swappable to support multi-shift needs. The carts can power PCs, thermal printers, handheld scanners, RFID readers, or power up mobile devices that need a recharge, with height adjustable mounting options for monitors or other gear.

Shaheen says DTG’s lithium battery technology is core to the effectiveness of its carts, but much of the value comes from DTG’s staff who have Six Sigma expertise, and consult with an operation on which workflows are the best candidates for process efficiencies.

For example, says Shaheen, a DC that ships large, bulky items like gas grills, could have a worker roll a mobile workstation near that inventory to print shipping labels, rather having a worker to walk to a fixed printer location, walk back to the oversized inventory, find the correct SKU or SKUs, and apply the labels.

“If you’re at a fixed printer station, and you have to walk across the warehouse to where those large items are to apply some labels, there is more chance for distractions, and mistakes,” says Shaheen. “It’s easy to place a label on the wrong item. Mobilizing the workstation and bringing the technology to the point of task reduces the risk for such errors, in addition to reducing travel.”

While reducing errors is part of the benefit, the main area of payback comes from reducing unneeded steps and work travel, because Shaheen point out: “Steps take time, and time is money.” 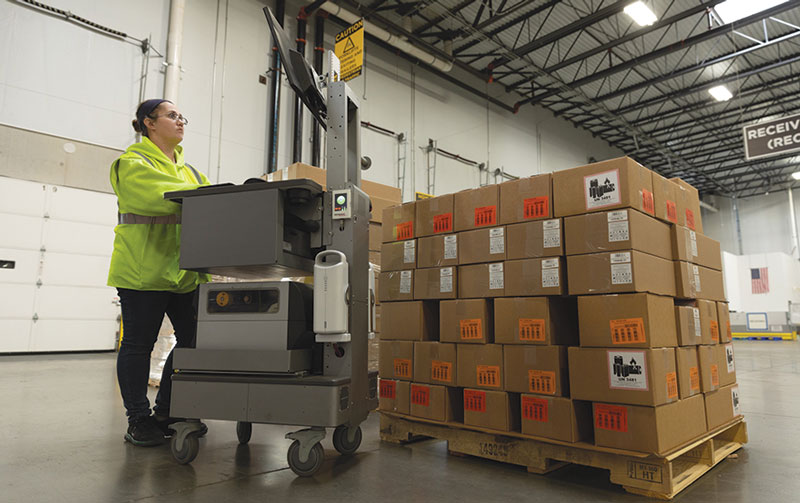 Mobile warehouse computer carts with on-board lithium power can be seen as tool for eliminating worker steps and costs from order fulfillment processes in DCs.

Ed Brown, founder and CEO of Topper Industrial, a provider of materials handling carts, concurs that the trend toward automation is a major driver. While some of Topper’s carts are intended for manual operation, the company also specializes in carts pulled by either human-operated tuggers or AGV/AMR tuggers. This summer, he adds, Topper was working to provide carts for about a half dozen active AGV projects, and working on quotes for carts for several others.

“There is just a huge challenge with finding enough labor right now, so many companies are looking to automate more,” says Brown. “It’s actually a combination of trying to gain efficiencies via automation, along with making the operation safer. For me, safety is the No. 1 concern, but the volumes are getting so big for many of these 24/7 operations, and labor availability is such an issue for them, that they are looking for efficiency gains by using more automation.”

When used as part of a tow train system, either manual or automated, the cart design itself can add efficiency, even if much of the efficiency of the overall system comes from hauling multiple loads at once. 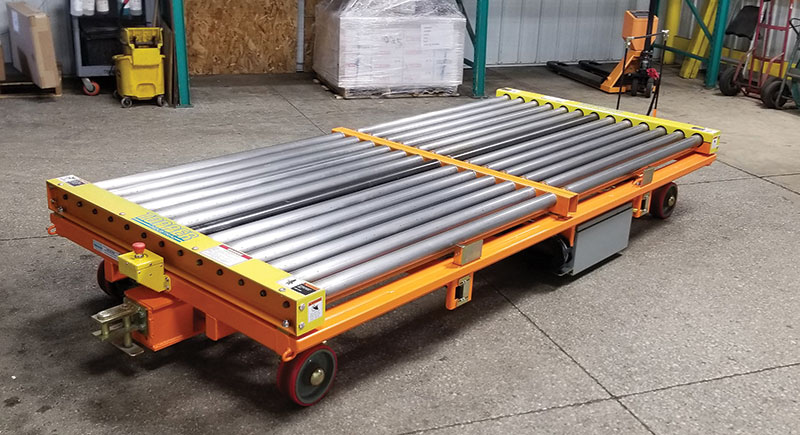 Transfer carts typically need to be able to handle heavy loads and may feature roller tops or other mechanisms to facilitate transfer of materials to conveyor or other equipment.

“Rather than going back and forth four times with a lift truck to move materials from one location to another, you can use a tugger to pull a train of four carts, so there is some pretty simple math involved in the efficiency of tow-train systems,” says Brown.

Tuggers and tow trains are often used in manufacturing for line-side replenishment of work-in-process (WIP) materials, moving multiple carts from a warehouse area to an assembly line or production work cell. In such applications, a “mother daughter” cart design minimizes handling time because any “daughter” cart in the train can detach from its mother cart without decoupling other mother carts on the train, Brown explains.

“With the right cart at the assembly line, you can eliminate the need for a lift table or a turntable, or whatever you may need for ergonomics,” Brown says. “You don’t want people bending any more than they have to, and our carts address that because they can be made to any height you want, or be adjustable.”

Brown concurs that with carts used with mobile automation, it’s worth it to invest in high-quality casters, typically sealed casters with polyurethane wheels. “I feel the best investment on any cart is to get it with the very best casters you can put on it,” says Brown.

As for the move to AGVs or…

Read More:Tuggers, Carts and Casters: Evolving the Wheel for Automation