If you are a cobot vendor and don’t yet have a solution for picking and packing apparel/fashion SKUs, then you’re missing out on a massive, global B2C eCommerce market segment, which is estimated at $752.5 billion (2020), and forecast for 2025 to be $1.1 trillion.

Apparel and fashion don’t ship on hangers. Most often apparel and fashion items are those SKUs that come to a packing area in shiny plastic packaging that’s highly reflective and difficult for vision systems to see; and therefore, difficult to recognize and sort…and, for that matter, to sort quickly and productively (like 700 SKUs an hour). The same shiny packaging might also present difficulties for a cobot’s gripper to properly pick up and sort. 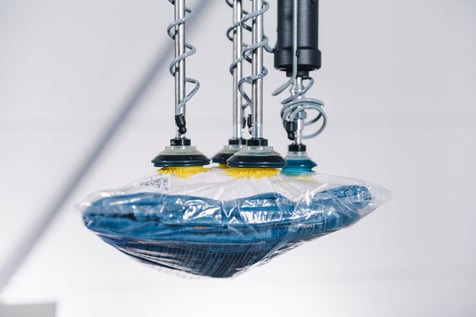 Therefore, a specially tailored solution to the apparel/fashion challenge is highly desirable. And Netherlands-based Smart Robotics (founded 2015), which is most definitely in the pick and pack cobot biz, has just announced theirs: the Smart Fashion Picker. How appropriate.

Smart Robotics’ PR release claims that its Smart Fashion Picker “can pick a large variety of fashion items, which are placed in protective wrapping [the aforementioned [“shiny packaging”], straight from a cart or bin. Vision sensors, motion and task planning algorithms help the cobot to calculate what to pick next, as well as how to pick and place the item accurately into the next bin, and it can easily detect when the bin is empty or filled.”

Smart Robotics says the Smart Fashion Picker is “one of the many improvements it has in the pipeline to make warehouse automation more versatile and dynamic in a highly performant logistics industry”.

“We’re super excited to introduce this product to the wider market after successful implementation with our initial customers,” says Johan Jardenvall, CEO at Smart Robotics.

Of course, only time will tell how effective the Smart Fashion Picker is on the job, but, for now, the vendor is presenting the desired tailored Pick N’ Pack system at the exact right time during a growth spurt in the industry.

When exoskeletons become clothes: the exosuit

Those who suffer from multiple sclerosis (MS), cerebral palsy (CP) or stroke don’t see an exoskeleton or exosuit, rather, they see a godsend! 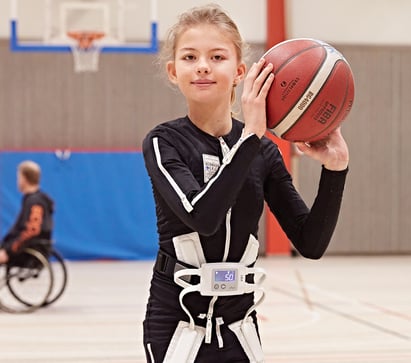 In 2021, German med-tech giant Ottobock acquired Lundqvist’s Exoneural Network, buying 100% of the outstanding shares. Together with its previous acquisition of US-based SuitX (occupational exoskeletons), Ottobock is now the global leader of prosthetics, orthotics, and exoskeletons.

Lundqvist’s exosuit, still manufactured in Sweden, comes in 37 different sizes starting from 2–3 years of age and up to 5XL for men and women. Cost: $5800 or $540 rental per month.

Better still, a lifetime sentence of involuntary and continuous muscle spasms is 100% corrected by a wearable robot (see video).

In praise of homemade robots

COVID has prompted the spending worldwide of some $228 billion for purchases of endpoint devices, robotics, and drones…just in 2021 alone! But it doesn’t take billions of dollars, as a small town in Indonesia has shown, to create service robots that disinfect and tote food and supplies to those in lockdown. Ingenuity and localized innovation can go a long way. 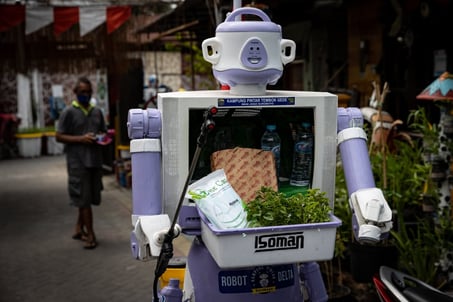 With a robot’s head made from an old rice cooker, chest from a discarded television set, and its base from a junked toy car chassis, the residents of the Tembok Gede district of Surabaya, capital of the Indonesian province of East Java, are making due by basically dumpster-diving and improvising robotics gear.

Particularly hard hit with COVID, especially the Delta variant (Indonesia has had 3.68 million COVID infections and more than 108,000 deaths), the villagers of Tembok Gede, under the direction of a few local engineering professors, constructed a service robot they named Delta.

Aseyanto (uses only one name), a neighborhood leader who heads the “Delta robot” project, said: “With this new Delta variant and the surging number of COVID-19 cases, I decided to turn the robot into one used for public services such as to spray disinfectant, deliver food and meet the needs of residents who are self-isolating.”

After moving down the street to the home of a self-isolating villager, the robot’s speaker sends out the message “Peace be with you,” followed by “A delivery is here. Get well soon.”

Operated by remote control, with twelve hours of battery life, Delta is now one of several robots made in the village that has won Tembok Gede a reputation for its creative use of technology.

There are many 3D-printed robot arms available, but most are wonderful educational toys and not cut out for real work, like machine tending in a factory or piece picking in e-commerce.

Not so for Real Robot One or RR1 from the laboratory of Pavel Surynek. Sure, it’s a prototype, but it’s a first, and may well lead to a near future of high-grade, 3D-printed robot and cobot arms becoming regular players in industrial robotics. 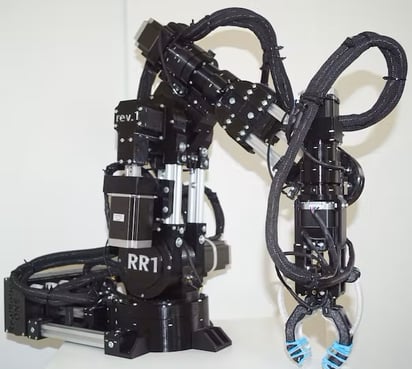 The criteria for a useful robot or cobot arms are precision, accuracy, repeatability, and strength; and the RR1 checks off all those boxes, which has been a near impossibility via any 3D-printing process, until now.

RR1 (Real Robot One),” like most multi-axis robot and cobot arms, has stepper motors that rotate the joints. However, the RR1 is unique in that each motor has a 3D-printed planetary gearbox to increase torque and motor output resolution.

“Those help the robotic arm lift quite a bit of weight and move with precision,” says Surynek. The RR1 has six joints, so it contains six of those gearboxes. The final degree of freedom is the end effector, which is a servo-driven gripper.”

In this drawing (see exploded view), the planetary gearbox consists of 3 planets—herringbone gears—and one middle gear connected to the motor axle.

Amazingly, Surynek has pulled off the design engineering and manufacturing of this complex planetary gearbox with a 3D printer, which is a key development in making robot and cobot arms truly useful. 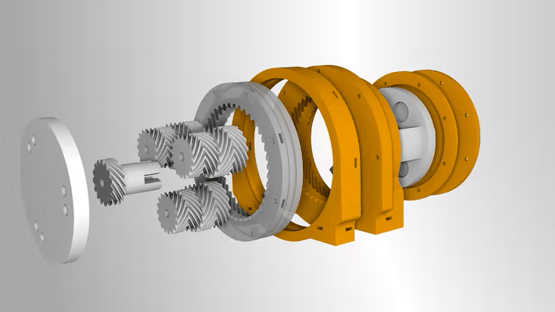 Founded in 2019, by former SpaceX engineer Benson Tsai, (and 23 other former SpaceX employees), but not launching until the fall of 2022, new robot startup, LA-based Stellar Pizza, has trained its robots to knock out an oven-ready, large pizza in 45 seconds.

That’s record-setting speed for an autonomous machine, but still, a slowpoke compared to two-time world champion, Canadian Werner Lomker, who made three large pizzas in an impressive 47.56 seconds—equal to making each pizza in roughly 15 seconds!

Of course, Stellar Pizza’s robots can work the dough, tomato sauce, and grated mozzarella circuit around the clock without stopping; Lomker’s productivity, on the other hand, has its limits. According to Tsai, the main problem that Stellar Pizza solves is the rising food costs in the United States. The USDA’s inflation watch concluded that found there was more inflation for grocery and supermarket store purchases then for restaurants.

“The process to make them isn’t terribly different from that of pizzas made by human hands; first, a metallic arm lowers into a refrigerated box and grabs a ball of dough, depositing it onto a conveyor belt, where a disc lowers to press it into a 12-inch circle (the company makes the dough at its headquarters then loads it into the machine’s refrigerator in pre-portioned balls).

“As the raw crust moves along on the belt, various machines dot it with tomato sauce, shake cheese onto it, add other toppings, then lift it into a 900-degree oven for baking. The pie’s journey is tracked by cameras and sensors, which can make adjustments as needed.”

BTW: All of this takes place in a moving truck!

Where does the Schneider Electric Altivar ATV320 Machine Drive fit?

Where does the Schneider Electric Altivar ATV320 Machine Drive fit?

What the Latest World Robotics Report Tells Us

11 Benefits of Palletizing Robots in a Pharmaceutical Packaging Process