News briefs for the week take a look at Time Magazine’s annual issue of Best Inventions for 2022. As expected, robotics is a well-represented category. However, robotics has seeped its way into many other categories and many other inventions. We tracked them all! Amazingly, robotics tech pops up across most of Time’s entire list of categories. Join us for a look.

Time Magazine’s annual issue of Best Inventions for 2022 is out, and robotics is everywhere! Even grabbing the coveted cover spot.

Although there are 25 categories of global best inventions ranging from AI to Wellness—with Robotics having its very own category—it’s fascinating to note how robotics has managed to seep itself into nearly every other category. 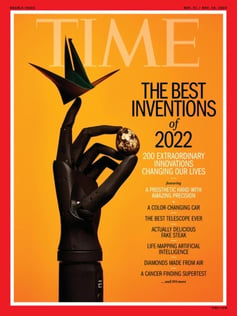 For example, the AI category shows the Exodigo Subsurface Mapping Platform, which is enabled by a ground-hugging hovering drone. Then there’s the Accessibility category which has both the ElliQ, the eldercare robot from Intuition Robotics; and also the Esper Bionics first-ever, AI-powered, cloud-based robotic hand (the Esper robotic hand is also on Time’s cover; see photo).

AUTOMOTIVE
The Automotive category sports the Aeva Aeries II 4D LiDAR. The Aeries II goes beyond LiDAR’s well-known mapping of the 3D position of objects for autonomous vehicles to “instantly measuring the velocity of everything in a 120-­degree field of vision.” Hence, 4D LiDAR.

DESIGN
The Design category shows the “10-day home.” ICON’s 3D-printed House Zero, with its wall system of proprietary Lavacrete (a high-strength concrete), which can be printed in 10 days and improves energy efficiency while reducing material costs, waste, and build time. ICON this year broke ground on the country’s largest 3D-printed community, a 100-home project in Austin, Texas.

EXPERIMENTAL
The Experimental category hosts Vicarious Surgical’s ultra-small, robotic surgical system that makes incisions barely 1.5 cm (0.6 in.) in size. Through that teeny opening the robot enters the patient’s body. “Complication rates from open surgeries are 15% to 20%, just from the incision,” says Vicarious Surgical CEO Adam Sachs. “By making incisions really small … you can knock complication rates down to about 1%.”

HOUSEHOLD
And what’s a Household category without a robot vacuum? And no, this year there’s no Roomba in sight. Rather, Roborock S7 MaxV Ultra from Digital Design “a two-in-one mop-and-vacuum robot that automatically maps and recognizes rooms. It fills its own water tank, cleans its own mop pad, and empties its own dustbin.” For a spare $1400 (or, $77.78 for 18 convenient monthly payments, interest-free), Amazon can get it to your home’s dirt pile tout de suite!

TRANSPORTATION
Transportation, as might be expected, showed the most in robotics. Norway’s all-electric, autonomous Smart City Ferry from Hyke autonomously navigates harbor waterways and docks at passenger stations, where it wirelessly recharges.

Gatik’s driverless box trucks for “short-haul fixed-route deliveries for the retail industry that debuted two years ago (with drivers), have now gone solo (driverless). The box trucks move orders between a Walmart warehouse and a grocery store in Bentonville, Arkansas.

Zipline and its drones announced a partnership with Walmart to deliver small packages straight to customers’ front doors “within 50 miles of its drone distribution center in Pea Ridge, Ark. Zipline’s drones don’t land; they airdrop parachute–protected packages within 15 minutes of ordering.”

Then there’s Boeing’s MQ-25 Stingray, which is an autonomous flying fuel tanker that can refuel fighter jets while aloft. The U.S. Navy “plans on procuring 76 of the Boeing-made drones.”

ROBOTICS
The category marked for pure Robotics has eight innovation winners for 2022.

Those winners range from the familiar Flippy 2 from Miso Robotics that works as a fry cook in fast-food restaurants for $3,000 a month; and comes with “a new “AutoBin” system that uses AI to recognize raw ingredients, fry them to perfection, and then place them in hot-holding.”

LG Electronics launched this year its CLOi the Servebot into a pool of a half-dozen other similar food-serving and table-busing robots on the market. LG’s robot, however, is the “first commercial service robot to be globally certified for safe operation in places like restaurants and hotels.” In addition to that distinction, CLOi “can carry up to 66 pounds and work 11 hours straight, using LiDAR sensors and a 3D camera to move through crowded spaces.”

Lyra, a tracked, tank-looking machine, developed by the University of Manchester, rumbles through underground shafts in nuclear plants mapping radioactive materials with its “five radiation detectors, a laser scanner, two cameras, lights, and a manipulator arm that can take swab samples from the walls or floors of the duct.”

As Time’s innovation judges said of Phantom Auto’s Remote Operation Platform for Logistics, “forklift operators can finally work from home!” The WFH forklift driver sits at a computer outfitted with a steering wheel, pedals, and other forklift controls. The remote driver has real-time 360-degree eyes and ears around a vehicle and the ability to remotely communicate with on-the-ground colleagues via a two-way audio system.

With an exoskeleton for the rest of us, Enhanced Robotics unveiled the Sportsmate 5, which is worn around the waist and braces the thighs. The exoskeleton provides assistance or resistance during activity with the touch of a button. The Sportsmate 5’s algorithms “can detect a person’s gait and produce the torque needed to help someone to more easily achieve that motion.” Or, trainees can work it in reverse by generating more force for their muscles to train against.

Then there’s Hydrus, the subsea drone. Much like anyone can personally own and use an airborne drone, the inventors of Hydrus seek to produce a subsea drone that anyone can own and use as well. As such Advanced Navigation is offering its autonomous underwater vehicle “to democratize oceanic exploration.” Weighing a mere 15 pounds, with 4k cameras and an AI image processing system, Hydra can descend to a depth of 9,842 feet (3,000 meters). Prices start at $45,000.

According its builders, here’s a glimpse of how Hydrus will “democratize oceanic exploration.”:

NOT JUST ROBOTICS
Interesting in TIME’s Best Inventions for 2022 was the fact that the list included all technology, and not just robotics. In doing so, Time offered up a glimpse across technology that clearly shows the inroads that robotics has made and continues to make into nearly every technical crack and crevice of invention. And that pace will undoubtedly continue!

Odds are that come Time’s picks for 2023, robotics will have seeped into ever more technology. As some pundits frequently warn: “The robots are coming for us.” Indeed, they are, but we humans seem to be the better off because of it.

8 Benefits of Palletizing Cobots in the Coffee Packaging Process

How to Make a Business Case for Automation

How to Make a Business Case for Automation

How to Win in the Future of Work

IO-Link Safety: What It Is and Isn’t